What are Emerging Markets?

The all-encompassing terms Emerging Markets and Developing Countries have been used for some time now to describe a set of nations that stand in contrast to their so-called “developed” peers. However, the group of countries that makes up Emerging Markets is very different today and way more diversified than it was only a couple of decades ago.

One measure that highlights these changes is the J.P. Morgan set of EM liquid USD bond indexes, which started out with the launch of the EMBI+ in 1995, consisting of only 14 sovereign issuers of tradeable US dollar bonds.

That list has expanded all the way into the EMBI Global Diversified index, which now consists of over 70 heterogeneous countries, with: a) nominal 2019 GDP ranging from USD 1.9bn (Belize) to USD 14,300bn (China) and b) GDP/Capita ranging from USD 490 (Mozambique) to USD 63,000 (Qatar). Figures 1 and 2 provide a snapshot of some of those countries. 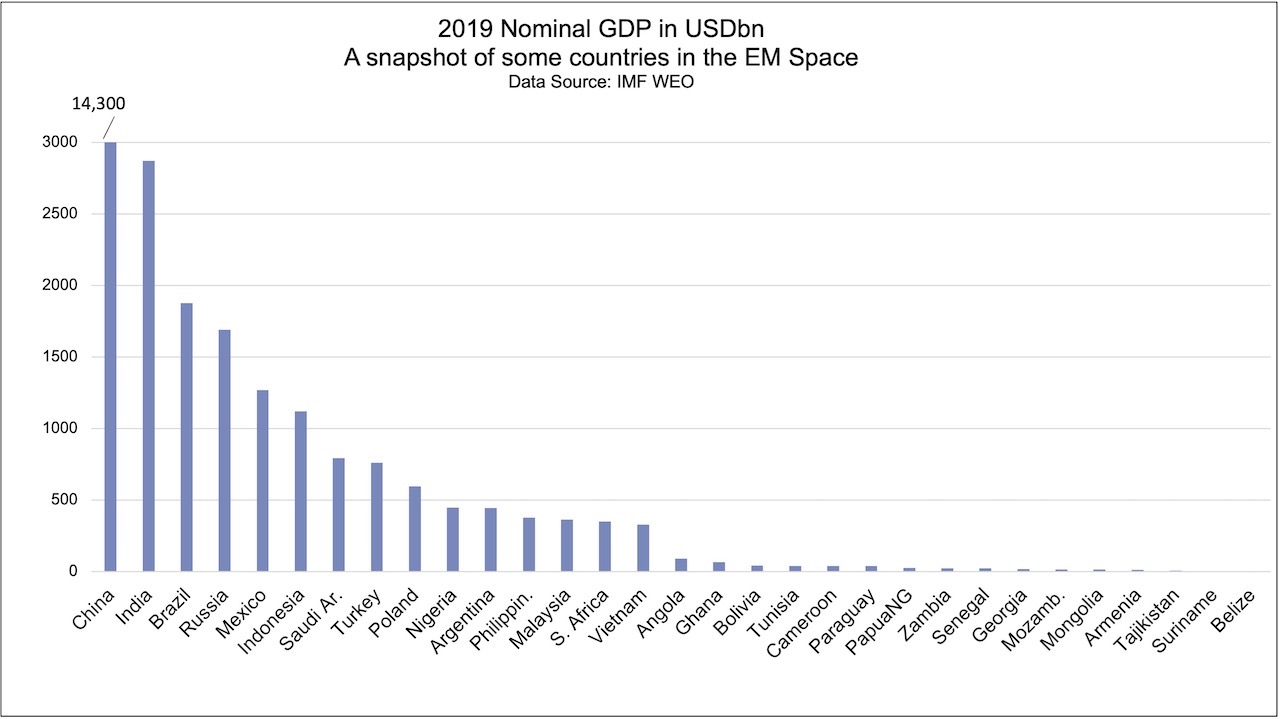 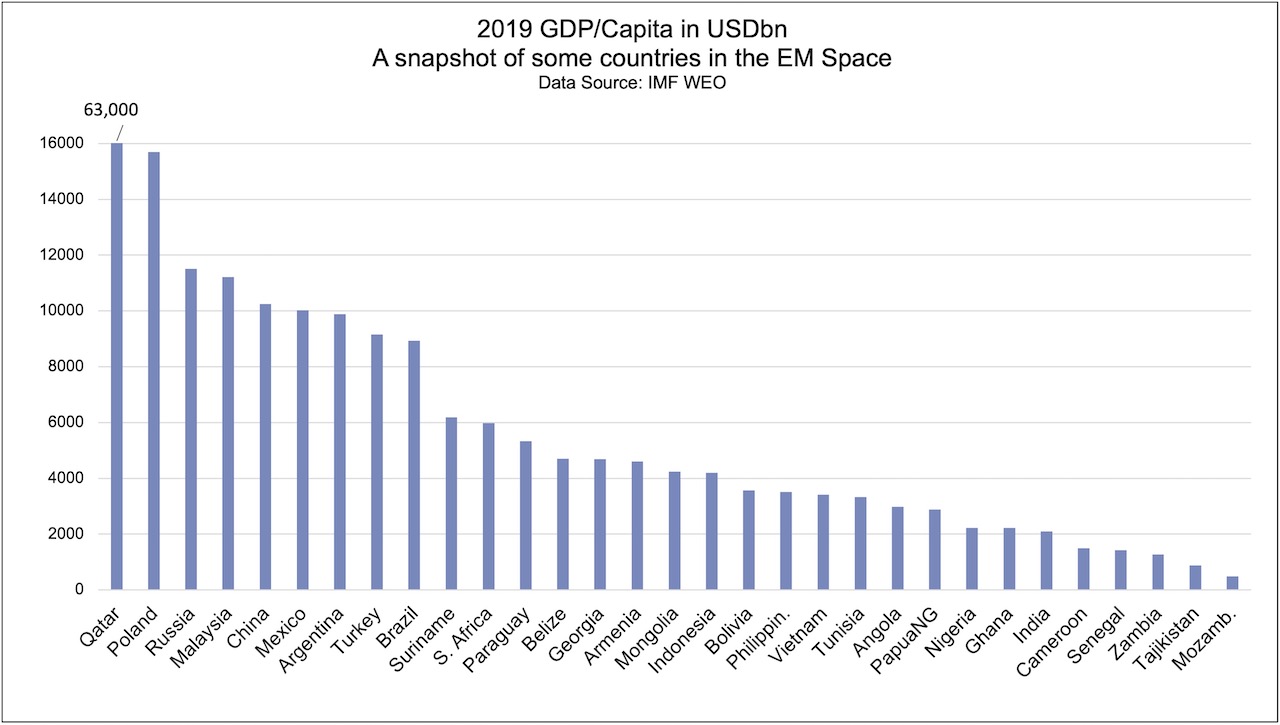 Furthermore, while total emerging economies’ GDP accounts for more than 40% of global nominal GDP in current US dollars, China itself accounts for almost half of that, second only to the US that makes up for around 24% of global GDP (figure 3).

To understand the huge changes that have taken place in China over the past 15 years, one needn’t look any further than the mere 5% of global GDP that China accounted for in 2006. If China continues to grow at these rates, the size of its economy will likely equal that of the US by 2030.

Those changes are also reflected in the fact that China now accounts for around 35% of the MSCI EM equities index, the other benchmark often used to define the sphere of Emerging Markets. Together with Taiwan, South Korea and India, the four largest Asian constituents account for 73% of the MSCI EM index, highlighting the very different pace of local stock market development across the wide EM group (Brazil, the largest Latam constituent accounts for “only” around 5%).

At Gemcorp, we are increasingly focused on the more recent addition to the Emerging Markets financial markets space, namely Sub-Saharan Africa. Although the region accounts for only 2% of global GDP (figure 4), its population of 1.1bn people is equivalent to a substantial 14% of the world’s population (figure 5), explaining some of the lowest GDP/capita levels and the need for considerable investment to increase productivity and diversification.

In addition, with numerous estimates showing Africa facing a trade financing gap of around USD 100bn per year, we have clearly observed the desire as well as opportunities to close that lender-borrower gap at both the sovereign and corporate levels. 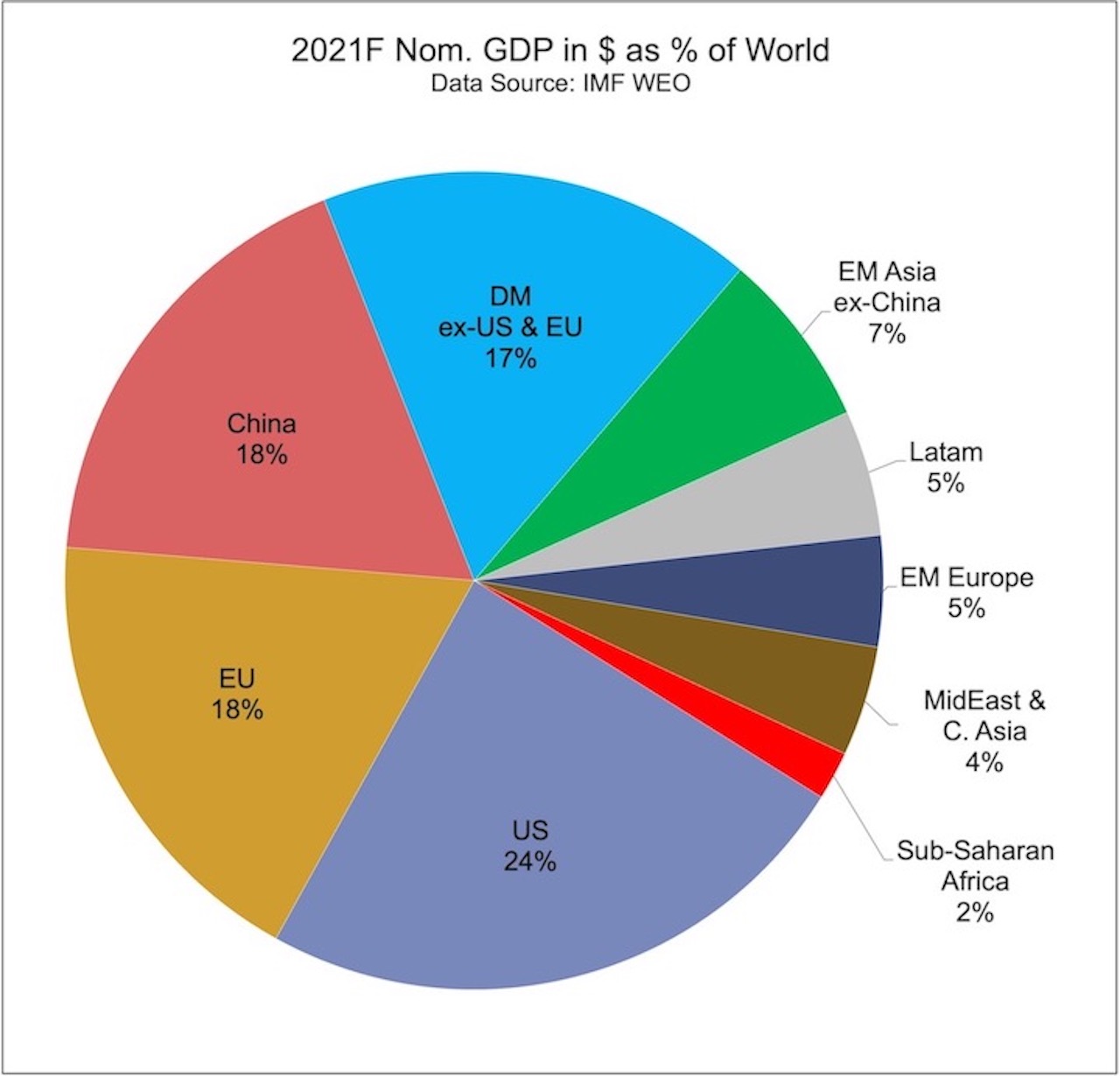 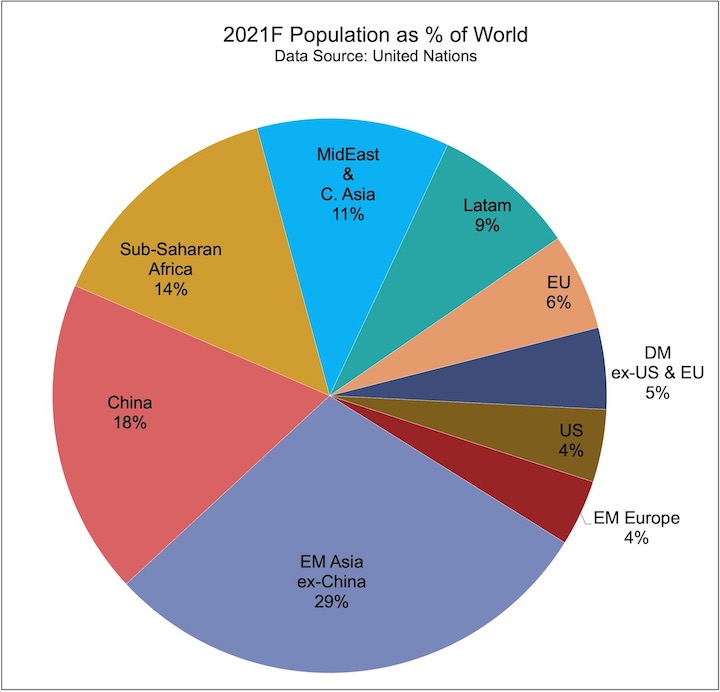 The Sub-Saharan African subset of countries where we see demand for trade finance and foreign investment at all levels includes the likes of Angola, Ghana and Ethiopia, which have all issued Eurobonds. At Gemcorp we have also identified and are working through viable projects in countries in the region that have little or no access to international capital markets.

Just like eastern Europe in the 1990s and 2000s, we perceive a general desire of many Sub-Saharan African countries to emerge further, empowering local populations to participate in a decade that is set to be driven by huge efficiency-boosting spending in northern America and Europe.

Indeed, with global security at the top of everyone’s mind, all this is vital for governments to be able to provide job opportunities and food security for ever-growing populations, yet another differentiator not only between EM and DM countries but also within Emerging Markets themselves. That story is clearly reflected in figure 6, which highlights GDP versus population growth rates in individual countries. 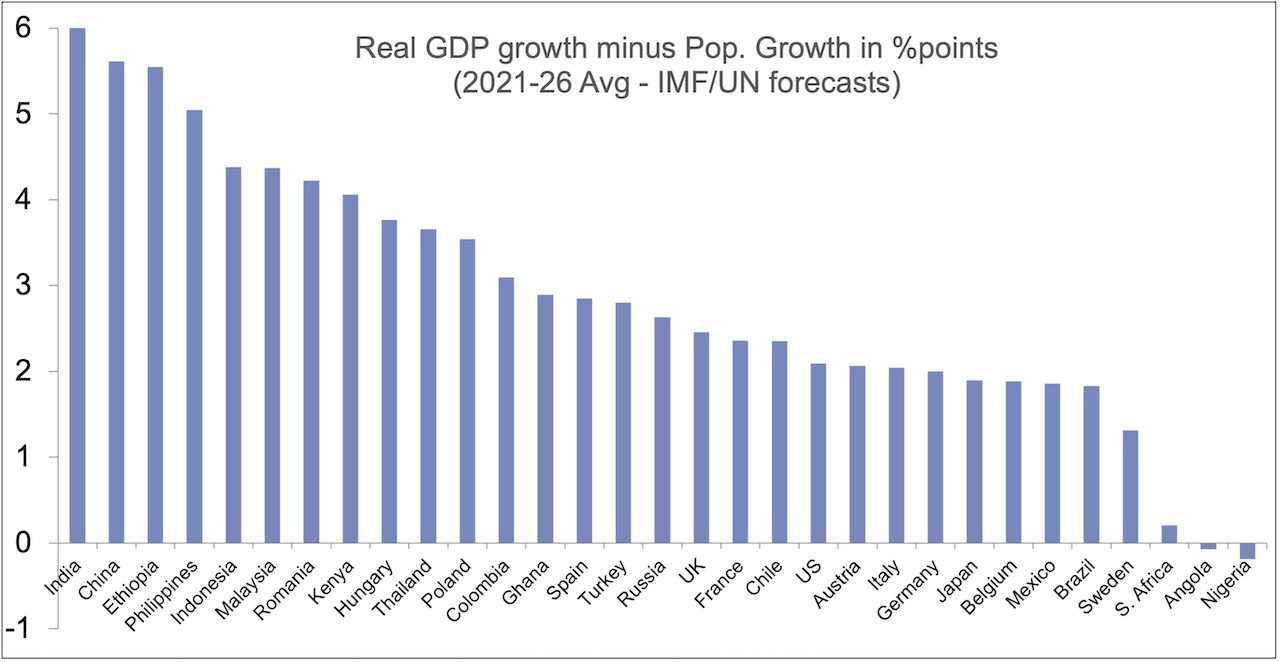 Looking ahead, Emerging Market countries, and especially Sub-Saharan Africa will only be able to emerge and also converge further onto their DM counterparts by having access to a combination of lending capacities and know-how of both the international official and private sectors. That point is all the more important as the international community increasingly shifts demand away from fossil fuels, a major revenue source for numerous Sub-Saharan African countries.

This document has been issued by Gemcorp Capital LLP (“Gemcorp”), which is authorised and regulated by the Financial Conduct Authority (the “FCA”).

This does not constitute an offer to sell or issue any interests in any transaction. The information in this document has been obtained from various third-party sources, some of them forward looking statements and projections.  No representation is made or assurance given that such statements, opinions, estimates, projections or forecasts in this document are complete or correct or that the objectives set out in this document will be achieved. Gemcorp accepts no liability for such third-party information or the conclusions set out herein.

gemcorp@citigatedewerogerson.com
Back to the news room